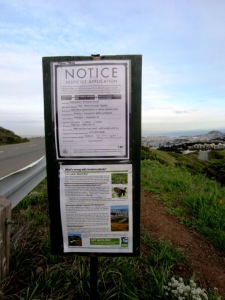 We are reprinting, with permission, an article on the Save Sutro website about recent research reporting that even low doses of chemicals can be harmful to our health.  This research has serious implications for the pesticides being used by the many “restoration” projects in the San Francisco Bay Area.  This article is focused on pesticide use by San Francisco’s misnamed Natural Areas Program.  In fact, every manager of public land in the Bay Area that engages in native plant “restorations” uses pesticides to eradicate non-native species.

When we speak up against the Natural Area Program’s frequent pesticide use, its supporters frequently tell us that – compared with say commercial agriculture – the Natural Areas Program (NAP) uses small amounts of toxic chemicals. “The dose makes the poison,” they argue.

But it’s not true.

For now, we’ll leave aside the question of whether it’s reasonable to compare NAP to  commercial agriculture (where fears of chemicals are driving a growing Organic movement). What we’d like to talk about today is recent research about pesticides, specifically, endocrine disruptors. Here’s a quote from the abstract of a study by a group of scientists:

“For decades, studies of endocrine-disrupting chemicals (EDCs) have challenged traditional concepts in toxicology, in particular the dogma of “the dose makes the poison,” because EDCs can have effects at low doses that are not predicted by effects at higher doses….

“…Whether low doses of EDCs influence certain human disorders is no longer conjecture, because epidemiological studies show that environmental exposures to EDCs are associated with human diseases and disabilities. We conclude that when nonmonotonic dose-response curves occur, the effects of low doses cannot be predicted by the effects observed at high doses.”

The NAP uses several pesticides rated as “Hazardous” or “Most Hazardous” by San Francisco’s Department of the Environment. But the one they’ve favored is glyphosate — better known as Roundup or Aquamaster.

It’s strongly suspected of being an endocrine disruptor.

Another study, also published in 2009, looked at puberty and testosterone: Prepubertal exposure to commercial formulation of the herbicide glyphosate alters testosterone levels and testicular morphology. The abstract of the study ends with this sentence, “These results suggest that commercial formulation of glyphosate is a potent endocrine disruptor in vivo, causing disturbances in the reproductive development of rats when the exposure was performed during the puberty period.”

And here’s a study published in 2007, reflecting the research of a group of scientists from Texas A&M: Alteration of estrogen-regulated gene expression in human cells induced by the agricultural and horticultural herbicide glyphosate 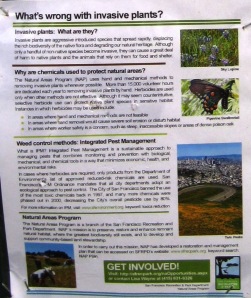 Most people weren’t aware that pesticides were being used in so-called “Natural Areas.” The notices were small and well below eye-level. You had to be looking for them, which isn’t likely for most people out hiking or jogging by, or keeping an eye on small kids. In recent months, the labeling has improved, with taller posts and clearer information.

Now that people are beginning to notice, they’re also objecting. The response we hear most often is “Why would they use herbicides in a natural area?”

So the NAP has started posting explanations, justifying its use of toxic herbicides justifiable against “invasive plants.”

These plants, they say, are “a handful of non-native species” that are “displacing the rich biodiversity of native flora and degrading our natural heritage.”

We have several problems with this statement.