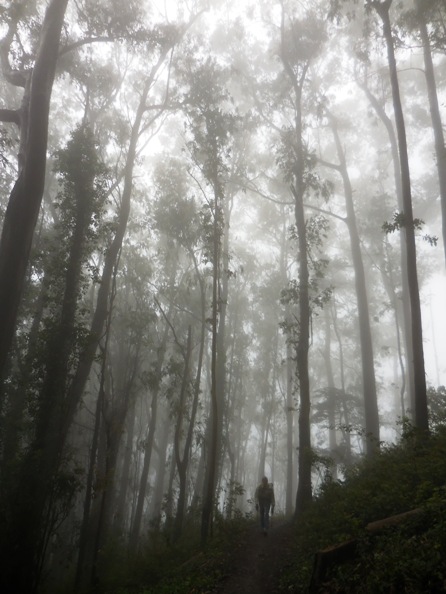 Climate change is the environmental issue of our time.  The fact that the climate is warming is indisputable and the consequences of the changes are becoming more evident.  Much of California has warmed over 3⁰ F since 1980.

The impact of climate change on biotic and abiotic realms has been far-reaching:

Given the life-threatening conditions created by the warming planet, it seems a small quibble to argue about whether or not the landscape must be transformed into some semblance of what it was in the 14th century, prior to global explorations and colonization by Europeans.  We are doing next to nothing to address the causes of climate change, yet we are spending approximately $25 billion per year on such “restorations” of historical landscapes.  When these projects kill trees, they make climate change worse.  California is considered a leader in addressing climate change in the US.  Yet, when calculating carbon loss to meet stated targets for reduction, California does not include carbon loss in the trees that are destroyed.

There is nearly universal agreement in the scientific community that climate change is caused by greenhouse gasses emitted by the activities of humans.

Note that “forestry” (more accurately described as “deforestation”) contributes more greenhouse gas emissions than transportation.  In both cases, carbon dioxide (CO₂) is the specific greenhouse gas that is emitted by these sectors of the economy.  In the case of transportation cars, airplanes, ships, etc. are using fossil fuels that emit CO₂ when burned.  In the case of deforestation, the CO₂ that is stored by trees during their lifetime is released into the atmosphere as a greenhouse gas when the tree is destroyed and its wood decays.  And the loss of the trees means there will be less carbon storage in the future. Even if new trees were planted, less carbon would be stored because carbon storage is largely a function of biomass; that is, bigger trees store more carbon:

Forests cover 31% of the land area on Earth and annually 75,700 square kilometers (18.7 million acres) of the forest is lost as a result of wildfire, clearing for agriculture and grazing, and logging for timber.  For the past 25 years, we have also been destroying trees just because they aren’t native.  In California we destroy eucalyptus, Monterey pine and cypress outside their small native range, and a few other non-native species.  In the Southwest we destroy tamarisk trees that were planted to control erosion.  On the East Coast we destroy ailanthus (tree of heaven).  In Florida we destroy malaleuca trees.  Native plant advocates call these trees “invasive,” but a more accurate description is that they are successful trees, well adapted to current climate conditions.  There are probably many other non-native trees on the long hit list of native plant advocates.

Other benefits of trees

Trees are valuable members of our communities for many reasons in addition to storing carbon.

We don’t need to speculate about the consequences of destroying trees because there are many specific examples of the negative impact of destroying large numbers of trees.  Here are two examples, one modern and one historical.

The island nation of Comoros, off East Africa, once had an extensive cloud forest, a forest in which trees are often surrounded by low-level cloud cover. Cloud forests, such as the eucalyptus trees shrouded in fog on Mount Sutro in San Francisco, condense large amounts of moisture out of the clouds that then falls onto the ground. Fog drip in San Francisco’s eucalyptus forests adds sixteen inches of rainfall each year in those forests.

The delicate ecosystem on Comoros was disrupted when the cloud forests were cleared to make way for farmland. Between 1995 and 2014 about 80% of the remaining forest was cut down. The loss of trees disrupted the rainfall cycle on the islands. The moisture that the cloud forest was condensing from the fog was lost to the ground when the trees were destroyed. That ground moisture was then no longer transpired back into the air by the trees that had been destroyed, resulting in less rainfall. The disruption caused waterways to dry out, and left once-fertile soil exposed to erosion, with the loss of nutrients in the soil that remains. Comoros has lost 40 permanent rivers in the last 50 years. There is no longer enough water for agriculture or the daily household needs of the population.

Restoring forests is a challenge, and cloud forest can be particularly difficult. “It’s impossible to replace it,” said a cloud forest specialist at the University of York in England. “You need to save them before they’re gone.” Comoros could be a lesson for those who want to cut down the cloud forest on Mount Sutro and elsewhere in the Bay Area. Disrupting the rainfall cycle could make our drought even more extreme.

Icelanders appreciate their trees because they have few of them.  Iceland was heavily forested, mostly with birch trees, when the Vikings arrived in the 9th century.  Within 100 years, settlers cut down 97% of original forests to build housing and make way for grazing pastures.  Now only 0.5% of the Iceland’s surface is forested, despite extensive reforestation efforts since the 1950s.  Lack of trees means there isn’t vegetation to protect the soil from erosion and to store water, leading to extensive desertification.

Reforestation efforts in Iceland did not attempt to restore native birch forests because they store little carbon and they are not useful for timber.  Seeds of pine and poplar from Alaska were introduced, but growth has been slow because the soil is nitrogen poor and the climate is very cold.  The growth rate is estimated to be only one-tenth of the growth rate of tropical forests in the Amazon.

Both of these examples illustrate that when forests are destroyed, they are not easily replaced.  Much like the historical landscape, we can’t go back.  Nature is dynamic.  It moves forward, not back.

San Francisco has one of the smallest tree canopies—only 14%–of any major city in the Country:

The small urban forest in San Francisco is storing carbon that would otherwise be released into the atmosphere as greenhouse gas, contributing to climate change.  “Carbon sequestration is the process by which atmospheric carbon dioxide is taken up by trees, grasses, and other plants through photosynthesis and stored as carbon in biomass (trunks, branches, foliage, and roots) and soils. The sink of carbon sequestration in forests and wood products helps to offset sources of carbon dioxide to the atmosphere, such as deforestation, forest fires, and fossil fuel emissions.”  (US Forest Service)

Carbon capture by above ground vegetation is proportional to biomass. Because Blue Gum eucalyptus is the largest and most common tree in San Francisco, most carbon storage in San Francisco’s urban forest is in eucalyptus trees, according to an inventory done by the US Forest Service, as illustrated by this graph of the inventory.

Native plant advocates defend the destruction of our urban forest by making the inaccurate claim that grassland stores more carbon than trees.  While it is true that more carbon is stored in the soil than in above-ground vegetation, it does not follow that the soil in grassland contains more carbon than the soil in forests.  The US Department of Agriculture report, “Considering Forest and Grassland Carbon in Land Management” (2017) graphically illustrates that forests in the US store far more carbon per hectare than any other land type and grasslands store the least amount of carbon per hectare of undeveloped land in the Western United States:

I am mystified by the obsession with native plants.  Still, I respect everyone’s horticulture preferences.  If you prefer native plants, by all means, plant them.  We make just one request:  quit destroying everything else because the loss of our urban forest is contributing to climate change and depriving our communities of the many benefits of trees and forests.

2 thoughts on “Deforestation and Climate Change”