Fear of fire has been effective in the East Bay where there have been fires, although claims they were caused by non-native trees are a distortion of the facts.  For the past year, native plant advocates in San Francisco have been using a variation on that theme to support their demands to destroy all non-native trees.  They now claim our eucalyptus forest is dying of drought and must be destroyed before it causes a disastrous fire.  You can read that story line in Jake Sigg’s Nature News (here) or in his recent public comments to San Francisco’s Urban Forestry Council (here), which is in the process of developing Best Management Practices for San Francisco’s urban forest.

It is our pleasure to republish this post from Save Mount Sutro Forest, responding to those claims.  As usual, it is meticulously researched and documented.  We only wish to add this small bit of common sense: The drought is hard on all plants.  If the drought were capable of singling out one species of tree to kill, it would not be the drought-tolerant eucalyptus.

Jake Sigg, retired San Francisco Recreation and Parks Department (SFRPD) gardener who is considered the doyen of the Native Plant movement in San Francisco, has a widely circulated email newsletter. In it, he has been pushing the argument that thousands of eucalyptus trees in San Francisco are dying of drought, as evidenced by epicormic growth on these trees: “2015 is the year of decision, forced upon us by 20,000 to 30,000 dead trees.” He is suggesting they will be a fire hazard and that SFRPD must act, presumably by cutting down the trees. In a recent post, he published a picture of a tree covered in young blue-green leaves, and predicted it would be dead within a year.

Eucalyptus trees are drought-adapted, and the shedding of mature leaves followed by sprouting of juvenile leaves (epicormic sprouting) is one of their defense mechanisms. These trees survive in areas far drier than San Francisco, where fog-drip provides an important source of summer moisture. 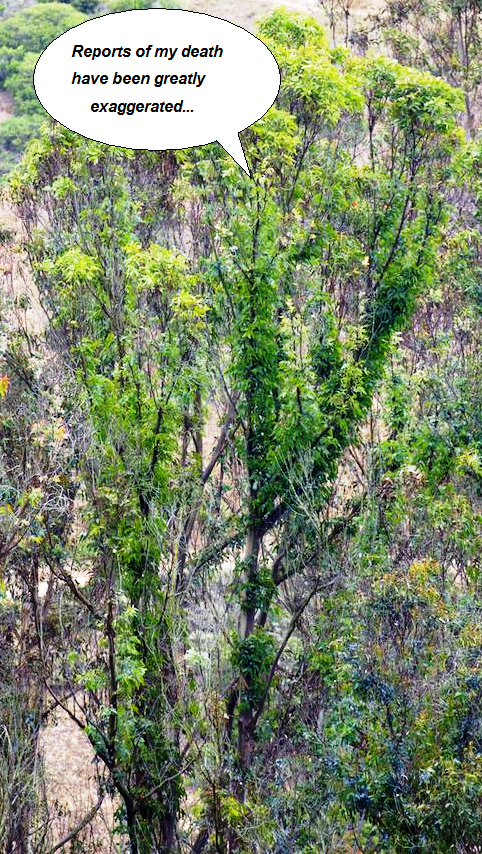 Eucalyptus trees are adapted to drought. They shed mature leaves and twigs so they don’t lose water through transpiration (the tree version of breathing, which takes place mainly in the leaves.) Later, they can replace the lost branches and leaves through “epicormic sprouting.”

Here’s what Jake Sigg said in a recent newsletter: “According to arborists, the trees produce these abnormal shoots from epicormic buds when their lives are seriously threatened. In this case, the tree is expected to be dead by the end of 2015. On Bayview Hill, barring heavy unseasonal rain, hundreds of the trees will be dead this year. Yet the City continues to not see a problem.”

We asked UC Berkeley Professor Emeritus Joe McBride and California’s leading expert on eucalyptus for his opinion. He’s observed this condition in trees along the edge of the Presidio forest and explains, “This response is common in blue gum as a mechanism to reduce transpiration rates in order to survive drought years.”

He continues: “I am not convinced that the trees will die in large numbers.” 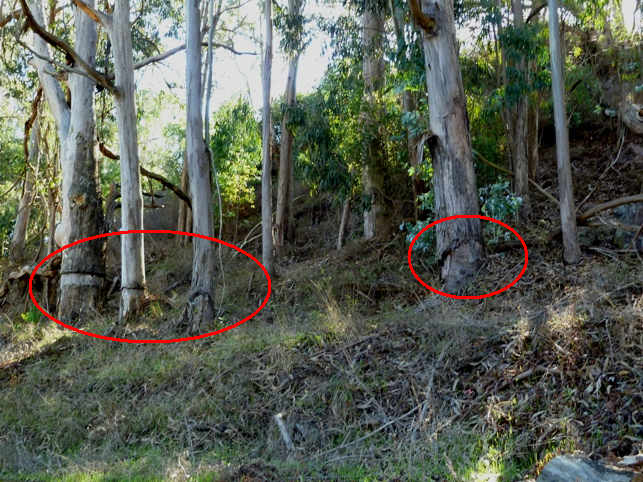 THE GIRDLED TREES OF BAYVIEW HILL

As an aside, we find it ironic that Mr Sigg should be so concerned with dead trees on Bayview Hill, given that’s where nativists girdled hundreds of healthy eucalyptus trees to kill them. 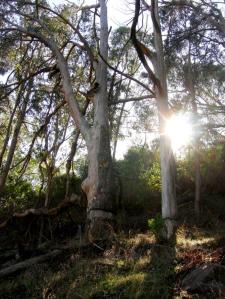 (This is done by cutting around the tree, thus starving it of nutrients that are carried only in the outer layers of the tree-trunk.) It’s clearly visible in the two photographs here, both taken on Bayview Hill.

In fact, one of the reasons eucalyptus is so widely planted – including in climates both hotter and drier than in San Francisco – is that it adapts to a wide range of conditions.

Here’s a quote from R.G. Florence’s textbook, Ecology and Silviculture of Eucalyptus Forests: 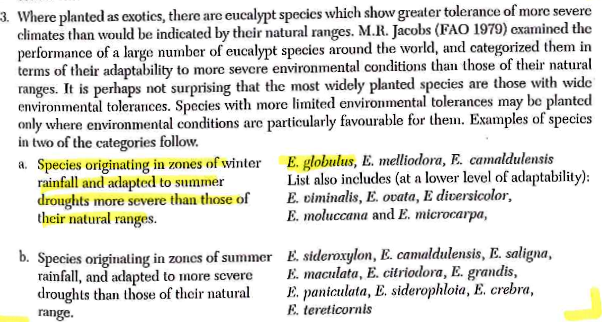 From p.121 of the same book: “… they regulate their water usage in hot dry summers by closing their stomata [breathing pores in the leaves] during the day and lowering their rates of gaseous exchange. They adapt by their elastic cell structure to water stress.”

EPICORMIC SPROUTING IS IMPORTANT IN EUCALYPTUS

Mr Sigg describes “how to identify a dying blue gum” as follows: “Look for trees with thinning foliage and copious juvenile leaves (called coppice shoots) hugging the main stems. These coppice shoots are easy to see because of their blue color and tight clustering, as opposed to the adult leaves, which are 6-8 inches-long, dull-olive-colored and sickle-shaped and which hang from the ends of long branches. These coppice shoots are the give-away that the tree is in trouble and is destined to die soon…” (He later corrected “coppice shoots” to epicormic growth.)

But again, this is not actually true.

In fact, epicormic sprouting allows eucalyptus to survive not only drought, as described above, but even fire. The epicormic sprouting grows into new branches to replace the ones that have been damaged in the fire. This is from Wikipedia: “As one of their responses to frequent bushfires which would destroy most other plants, many Eucalypt trees found widely throughout Australia have extensive epicormic buds which sprout following a fire, allowing the vegetative regeneration of branches from their trunks.[4][5] These epicormic buds are highly protected, set deeper beneath the thick bark than in other tree species, allowing both the buds and vascular cambium to be insulated from the intense heat.[4]”

And sometimes, dead branches and leaves and epicormic growth don’t even indicate stress – it’s part of the normal growth cycle. R.G. Florence’s book on eucalyptus says: the “mature crown of a eucalypt maintains itself by the continual production of new crown units, which die in turn. There will always be some dead branches in a healthy mature crown.” He goes on to say an “undue proportion of dead branches is an unhealthy sign” but a “reasonable proportion of death of crown units should be accepted as normal.” He also discusses the “epicormic shoots from dormant buds on the top and sides of the branch develop into leaf-bearing units of the mature crown.” (p.13) Eucalypts go through stages of development that include extensive self-thinning, particularly in younger trees. (p. 194)

Another reason for epicormic sprouts on eucalyptus is increased light. From Wikipedia, with references: “Epicormic buds lie beneath the bark, their growth suppressed by hormones from active shoots higher up the plant. Under certain conditions, they develop into active shoots, such as when damage occurs to higher parts of the plant or light levels are increased following removal of nearby plant. Epicormic buds and shoots occur in many woody species, but are absent from many others, such as most conifers.” [The Wikipedia article references the Encyclopedia Britannica.]

We have seen these epicormic sprouts in eucalyptus trees around the clubhouse in Glen Canyon after many trees were removed. 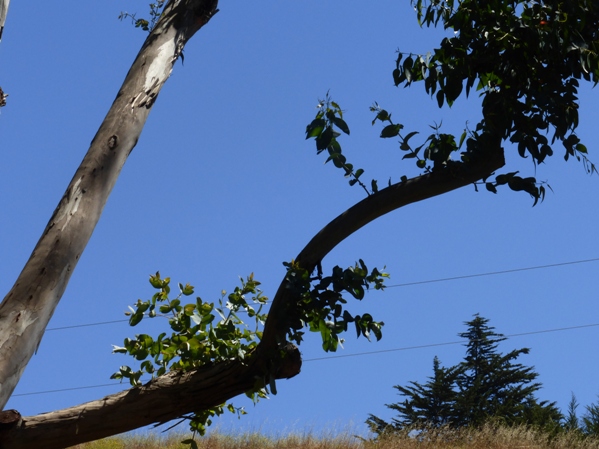 We also saw them on Mount Sutro near where 1,200 trees were removed for “fire safety.”

In summary, then, epicormic sprouting does not indicate that the tree is near death. It may indicate that the tree is responding to drought (or even to other stresses like pesticide use or damage to its root systems) with defensive measures. It’s like declaring that everyone who has a fever is bound to die of it. The trees below are the same ones featured in the picture at the start of this article – one year later, they’re surviving, not dying. 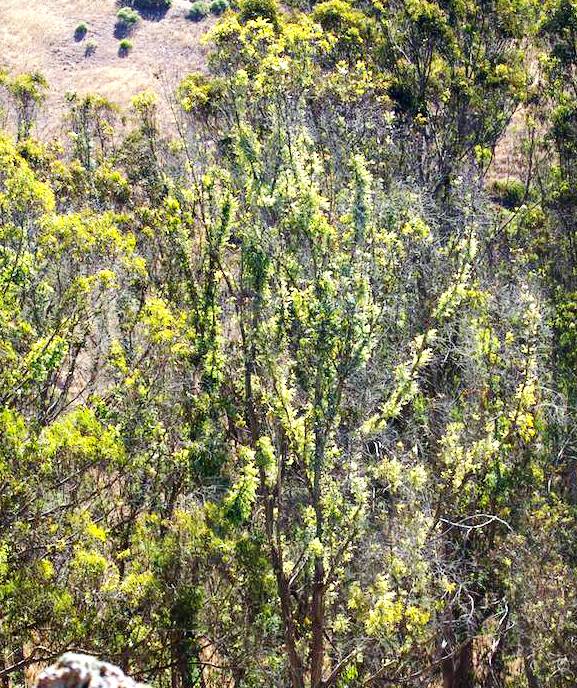 In some cases, epicormic sprouting may indicate nothing at all, except that the tree is going through a normal growth phase, or changed light conditions following removal of nearby trees.

LIVING WITH A FEW DEAD TREES

We asked Dr McBride if it made sense to cut down these trees. “I do not think the city would be justified in cutting trees down as a fire prevention action,” he says. “Cutting down drought-stressed trees at this point would be much more costly, sprouting would be difficult to control without herbicides, and the litter on the ground would have to be removed to decrease the fire hazard.”

“The problem as I see it is the accumulation of leaves, bark, and small branches on the ground. This material presents a serious fuel problem when it dries out sufficiently.” However, he points out that “In many eucalyptus stands in San Francisco the eucalyptus ground fuel (leaves, bark, and small branches) seldom dries to a point that it can be ignited because of summer fog and fog drip.” In dry areas, the best course is to “launch a program of ground fuel reduction by removing the litter from beneath eucalyptus stands.”

A few trees may indeed die, with the drought or without it. If you think of a forest as a normal population, you expect to find some trees that are thriving and some that are hanging on, and some that are dying – just like in any population. And dead and dying trees are very valuable to wildlife: They’re more likely to have cavities that are suitable for nesting (and are easier to excavate for woodpeckers and other cavity-building species). They also have bugs that come to feast on the decaying wood, and that’s bird-food.

18 thoughts on ““Drought-Adapted Eucalyptus NOT Dying by the Thousand””