Thanks to Professor Gordon Frankie (UC Berkeley), we have learned a lot about the bees in the Bay Area.  He has been studying our bees for over 20 years and has made a wealth of interesting information available on his website.

Unlike the European honeybee, our native bees are usually solitary.  That is, they do not live in social colonies such as the hives of the European honeybee.   Most (60-70%) California native bees live in small nests in the ground.  Although they may produce enough honey to feed their own young, they don’t store an excess of honey like the honeybee.

Professor Frankie has identified one of the biggest challenges to native bees in urban gardens, “Mulch Madness.”

“[If] you happen to be one of the many ground-nesting bees that looks for garden sites for digging small tunnels where you will lay your eggs in individually-made brood cells that you will provision with pollen and some nectar, [you have a new problem in urban gardens]…Something has happened in recent years to those favored bare dirt sites that makes your task much harder and oftentimes impossible.  MULCH MADNESS has arrived and has become a highly promoted ‘eco-friendly’ method for suppressing weeds, conserving water, and unknowingly discouraging ground-nesting bees!”

Anyone who is familiar with native plant restorations knows that most are covered in a thick layer of mulch.  When tree removals are required for a restoration, the mulch is usually composed of the chips of the trees that have been cut down.  The projects of UC Berkeley for which UC is applying for FEMA funding (based on its claim that the clear-cutting of all non-native trees will reduce fire hazards) say specifically that the clear-cut areas will be covered with 24 inches of mulch composed of the chips of the destroyed trees. 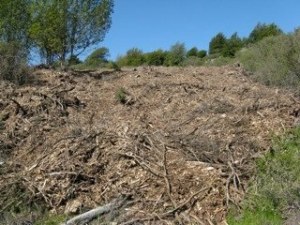 The UC Berkeley projects also claim that native vegetation will return to these clear-cut areas without being planted, based on an assumption that the seeds of native plants are dormant in the soil.  One wonders how these seeds would be able to germinate when covered with 24 inches of mulch, or how the sprouts could penetrate it.  Their proposal contains the fanciful suggestion that squirrels will plant the acorns of oaks in the mulch, which may be true of the oaks, but is an unlikely scenario for the many other native plants and trees which UC claims will populate their “restorations” without being planted.

In the unlikely event that native plants would emerge from this tomb of mulch, they won’t find a population of bees to pollinate them in the future because bees will not be able to populate these projects:  “bees will not dig through a thick layer of mulch.”  Frankie suggests that “about 50% of your garden be left in bare dirt for the bees and other organisms.”  Studies indicate that it will take between 10 and 15 years for 24 inches of mulch to decompose.

Native plant restorations also require the use of herbicides.  A particularly toxic herbicide, Garlon, is used to kill the roots of the non-native trees after they have been cut down.  If the stump isn’t sprayed with this herbicide immediately, the tree will resprout.  The plans for the UC Berkeley projects say that retreatment with this herbicide is required twice per year for 10 years.  Although insecticides are considered one of the primary reasons why bee populations are declining in the United States, less is known about the effect of herbicides on bees and other insects, because testing of these chemicals is minimal. Some scientists believe that all pesticides (both insecticides and herbicides) are more harmful to bees and other animals than we presently know.*  Professor Frankie recommends against the use of all “synthetic chemicals” in a garden in which bees are welcome.

The restorations with which we are familiar in the San Francisco Bay Area are often unsuccessful.  That is, they are not usually populated by native plants unless they have been intensively planted, weeded, and irrigated.  Few managers of public lands have the resources for such intensive gardening.  UC Berkeley has been clear-cutting non-native trees on its properties for about 10 years, so we can visit some of those areas to see the results of such projects.  They are now weedy messes, as shown in this photograph.

The use of heavy mulches and herbicides in native plant restorations raises these questions:    Would using less mulch and herbicide attract more bees?  Would more bees benefit the native plants?  Would restorations be more successful if they were more attractive places for bees?  We don’t claim to know the answers to these questions.  However, we don’t think that the managers of these projects know the answers either.

What the managers of these projects call “adaptive management,” we call “trial-and-error.”  There is no science involved in these projects.  Control areas are not set up to test questions such as “Will a more bee-friendly environment benefit our projects?”    We think a more methodical approach to these efforts would be less wasteful and more successful.  If we could see more success, perhaps we would be less opposed to what seems like the needless destruction of non-native trees.  As it is, the consistently poor results do not justify the destruction that we witness.

Gordon Frankie is a Professor in the Department of Environmental Science, Policy and Management at UC Berkeley.  He has been studying the preferences of bees in northern California for over 20 years.  In 2002 he published an article in Fremontia, the journal of the California Native Plant Society, reporting on the preliminary results of his study.*

First, a word about the methods used in his study.  His research team visited the residential gardens of north Berkeley and Albany twice per week for three years, 1999 to 2002.  In the first stage of the study, the team identified the plants that were being visited by bees.  In the third year, they focused on counting the number of visits made to the identified “bee plants” by each species of bee.

The plants of Berkeley

The bees of Berkeley

Frankie was surprised by the diversity of the bee population found by his research team.  They report having identified 74 different species of bees (updated on his website to 81).  Of those, only two were non-native bees (the European honeybee and the leaf cutting alfalfa bee).  Putting these numbers into perspective, there are approximately 1,600 species of bees in California and about 4,000 known to occur in the U.S.  Frankie reported that the population of European honeybees in the study area has declined significantly in the past 10 to 15 years.

What do the bees of Berkeley want?

Frankie explains that many non-native plants are not useful to bees because they have been cultivated for looks, rather than for the nectar and pollen needed by the bees.  However, on his website, he updates his research with some strong recommendations to include both natives and non-natives in our gardens both for the benefit of the bees and the benefit of native plants.

Non-native plants extend the blooming period in our gardens, which provides food to the bees for a longer period of time:

“California native [plants] tend to flower in early spring and summer, while non-native ornamentals bloom mainly in late summer to fall, so a combination of both would be ideal for attracting the highest potential density of bees.”

“If your priority is a healthy garden, it makes good ecological sense to consider your plants’ bee-attractiveness, rather than focusing exclusively on whether one hundred percent of your plants are natives.  Even if your priority is to have a native garden, it can be highly advantageous to include even a couple of exotic plants on the basis of their bee-attractiveness.  The bees they attract will help your natives thrive.”

Frankie reminds us that the bees don’t care about the nativity of the plants that they use.

“Insects and other wild animals make no distinction between weeds and plants we put in our gardens.  From the perspective of the bee, any plant that provides quality pollen and nectar is attractive.  For the short period they are in bloom, weeds such as dandelions and white clover provide bees with good sources of pollen and nectar.”

Opening our minds to the benefits of non-native plants

The bees of Berkeley remind us that the obsession with native plants is a human hang up that is not shared by animals.  They consider the nativity of the plants that are useful to them to be irrelevant.  So should we.