We believe that greater dialogue with native plant advocates would create more opportunities to find a compromise that would resolve the conflict about deforestation and pesticide use on our public lands.  Unfortunately, in the many years in which we have been engaged in the effort to prevent the destruction of our urban forest, we have found few such opportunities.

The Sierra Club is an extreme example of an organization that has isolated itself from all dissenting views on this issue.  Therefore, we were very excited that a member of the Sierra Club was able to send a letter to members, which we hoped would create new opportunities for dialogue with the Club and its allies on this issue.  (That letter is available HERE: Letter to Sierra Club members )

We are publishing today one of the responses that the author of the letter to Sierra Club received from a Sierra Club member.  We will also publish the reply to that letter.  We believe this dialogue is an example of the danger of isolating ourselves from those with whom we disagree.  When we refuse to discuss the issues, we deprive ourselves of opportunities to learn and we exacerbate conflict. 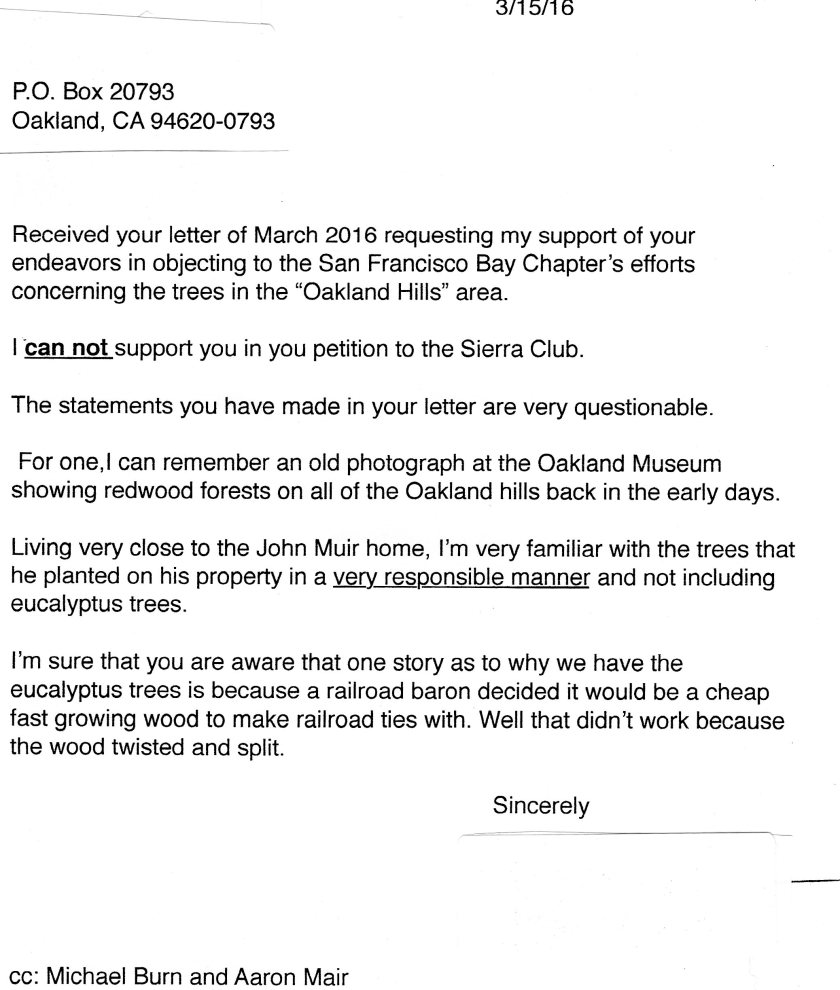 And this is the reply to that letter.  We have removed the author’s name because the letter was sent on behalf of hundreds of people who share her views.  Using her name more than necessary, inappropriately personalizes the issue.  This should be a public policy debate, not a personal vendetta.

Thank you for your letter of March 15, 2016, regarding my letter to Sierra Club members in the San Francisco Bay Area.

I am writing to provide you with the documentation about which you have questions:

Attachment A:  David Nowak’s “Historical Vegetation Change in Oakland…” states that, “Trees in riparian woodlands covered approximately 1.1% of Oakland’s preurbanized lands — redwood stand 0.7%, and coast live oak stand 0.5%.  Original forest cover is estimated at 2.3%…”  David Nowak has been employed by the US Forest Service since earning his Ph.D. degree from UC Berkeley.

I also recommend another visit to the Oakland Museum where you will find a touch screen map of historic vegetation of Oakland and surrounding communities in the East Bay.  It will confirm that the East Bay hills were not forested prior to settlement.

Attachment C:  This is a holiday greeting card sent by John Muir to a personal friend in 1911, in which he depicts eucalyptus and describes it in poetic verse.

We all have a right to our opinions, Mr. [redacted].  However, it is not in anyone’s interests to be misinformed of the facts regarding our urban forest.

Please let me know if there are any other statements in my letter for which you require documentation.

No, this is NOT an April Fool’s joke.  These are actual letters sent by actual people.  We will publish a more comprehensive report of feedback from Sierra Club members to the letter from a fellow member in late April.