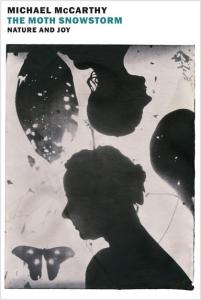 Michael McCarthy is a British environmental journalist whose love of nature originates with personal loss.  When he was only 7 years old, his mother had a mental breakdown that forced her to abandon him and his brother.  This traumatic experience caused irreparable psychological damage to his brother, but not to him because he withdrew from the family and found refuge in nature.

Fortunately, he lived close enough to wild land, where he could spend endless hours wandering on his own, watching birds, insects and animals.  He found peace there and because it was 1954, he also found an abundance of creatures.  The title of his book, The Moth Snowstorm, is a metaphor for the abundance of nature when he was a child:

“There were lots of many things, then. Suburban gardens were thronged with thrushes.  Hares galumphed across every pasture.  Mayflies hatched on springtime rivers in dazzling swarms. And larks filled the air and poppies filled the fields, and if the butterflies gilled the summer days, the moths filled the summer nights, and sometimes the moths were in such numbers that they would pack a car’s headlight with beams like snowflakes in a blizzard, there would be a veritable snowstorm of moths, and in the end of your journey you would have to wash your windscreen, you have to sponge away the astounding richness of life.  It was to this world, the world of the moth snowstorm, that I pledged my youthful allegiance.” (1)

Mr. McCarthy laments the loss of the natural abundance of his childhood and he places most of the blame for that loss on the explosion of agriculture in post-WW II Britain.  One of the lessons of the war was that there is greater national security in food independence.  Government policies began to subsidize agriculture to such an extent that it became profitable to cultivate every square inch of the British countryside, producing an agricultural surplus of which much is wasted.  The hedgerows of the past that had provided habitat for wildlife were plowed under.

Initially this chemical warfare was waged with DDT.  It took many years for the world to understand that DDT was killing birds and decades more for most countries to be willing to stop using DDT and other organochlorine pesticides.  It was a short-lived victory because, “They were replaced with new generations of pesticides which generally did not kill birds directly…Certainly, however, they all killed insects, and they did not just kill ‘target’ insects, they killed almost all insects, just as herbicides usually killed almost all herbs…”  (1)

The damage done to nature in the past 100 years is well known. The environmental advocacy of the past 50 years to stop—if not reverse—that damage is equally well known.  Mr. McCarthy briefly summarizes recent strategies to defend the environment and dismisses them as ineffective:

Mr. McCarthy believes those strategies failed because they “engage the intellect [without] engaging the imagination.”  He believes that the only effective defense of nature is based on the “joy and wonder” that nature brings to humans. He shares his personal experiences in nature that have made him a devoted advocate for its preservation.

Nostalgia for the nature of our childhood

Mr. McCarthy describes his first encounters with specific landscapes and species of birds, butterflies, and plants and the joy and wonder they brought to him.  Most of those encounters were in Britain, where he grew up, and so most are landscapes and species with which I am unfamiliar.  It was therefore, difficult to empathize with Mr. McCarthy’s emotional attachment to them.

And so I reflected on my own early experiences in nature and how they shaped my own aesthetic and horticultural preferences.  I was raised in a densely populated, suburban, working class community in Southern California by a single mother.  We did not own a car until I was a teenager and so our trips into wild nature were rare and memorable.  There were a few treasured trips to Catalina Island and one unforgettable trip to Yosemite in a Studebaker coupe packed with 4 children and 2 single moms.

As much as I enjoyed those trips, most of my childhood experience with nature was in my own small backyard, which was populated by a few fruit trees and flowering shrubs.  One of my most rewarding experiences in the garden was successfully growing a Charlotte Armstrong rose from cuttings given to me by a teacher when I was about 11 years old.  In retrospect, I now know that nothing in our garden was “native” although at the time I had no reason to know that they weren’t.

As different as my childhood experience in nature was from Mr. McCarthy’s, it was no less meaningful to me.  My childhood was as chaotic as Mr. McCarthy’s after the unexplained disappearance of my father when I was 2.  I built my ideal home in the dirt in my backyard and played out peaceful scenarios with my small plastic dolls under the canopy of the avocado tree.  The neighbor’s lantana bushes attracted swarms of skippers.  We puffed out our cheeks and put as many skippers in our mouths as we could, for the pure pleasure of watching them flutter out of our mouths, seemingly unharmed.  (I wouldn’t do that today, but I don’t begrudge my childhood self that pleasure.)  I bristle when I hear claims that lantana is “invasive” and must be eradicated as well as the claim that non-native plants are not useful to wildlife.  I know otherwise.

There are as many personal experiences in nature as there are people and they obviously vary widely depending upon location, lifestyle and a multitude of other variables.  Predictably, there are therefore a multitude of opinions about “ideal” nature.

Must nature be exclusively “native” or is a cosmopolitan mix of plants and animals equally valuable?  This is just one of many debates that rage within the community of people who all consider themselves environmentalists.  In our own gardens we can indulge our personal preferences, but the differences of opinion become a source of conflict when public open space is at stake. 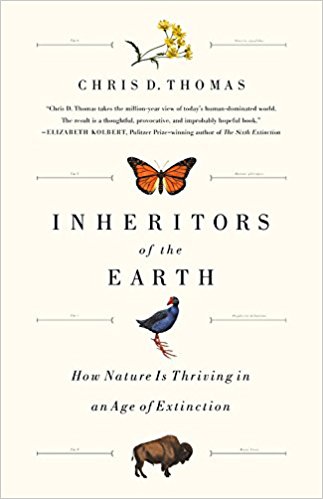 Acknowledging the ways in which nostalgia influences our preferences should help us to resolve those conflicts.  Chris Thomas is a British academic scientist who addresses this question in his new book, Inheritors of the Earth in which he calls out “conservationists for holding viewpoints that seem more driven by nostalgia than by logical thinking about the biological future of our planet.” (2) He believes that conservation efforts inappropriately focus on trying to defend the losers in nature’s great competition for survival, rather than backing the winners that are probably the species that are the future of our biological communities.

If we can acknowledge that our preferences are based on the past, rather than the future of nature, it is more difficult to justify the use of pesticides to destroy the future.  As Mr. McCarthy tells us, pesticides are one of the primary reasons why the abundance of nature is rapidly disappearing.  Using pesticides to kill existing landscapes is contributing to the loss of nature, not enhancing it.

Please give some thought to how your personal experiences have helped to shape your preferences in nature.  We hope that your reflections will help you to respect the preferences of others.

6 thoughts on “The role of nostalgia in our landscape preferences”