I attended my first Beyond Pesticides forum in 2014 in Portland, Oregon.  I have been a member of and donor to Beyond Pesticides ever since.  And I have purchased only organic food since attending that forum, because of a field trip to a community of farm workers that convinced me that growing our food without using pesticides benefits both consumers and producers of America’s food.

In a recent letter to the National Invasive Species Council, Beyond Pesticides describes their organization and mission:

“Founded in 1981 as a national, grassroots, membership organization that represents community-based organizations and a range of people seeking to bridge the interests of consumers, farmers and farmworkers, Beyond Pesticides advances improved protections from pesticides and alternative pest management strategies that reduce or eliminate a reliance on pesticides.” (The letter is available HERE: Beyond Pesticides – ISAC Comment )

I receive emails from Beyond Pesticides at least once a week, alerting me to opportunities to influence the laws and policies that regulate pesticide use in America.  As you might expect, the frequency of those alerts has accelerated a great deal in the past year, as the federal government is actively engaged in the process of dismantling many federal regulations, including those that regulate pesticides.

The National Invasive Species Council recently invited the public to submit public comments in answer to a few specific questions, in preparation for the next meeting of the Invasive Species Advisory Council.  Today I am publishing an excerpt of the letter of Beyond Pesticides in answer to those questions (some emphasis added).  I am doing so because I consider this letter a wise and informed critique of the entire concept of “invasive species” and the pesticides used to eradicate them.

I am also alerting the readers of Million Trees to the opportunity to attend the annual forum of Beyond Pesticides in Irvine, California, April 13-14, 2018.  Information about that meeting is available below.

“The National Invasive Species Council (NISC) posed four questions for public input to the forthcoming meeting of the Invasive Species Advisory Council (ISAC). We find it most helpful to begin with the fourth: “How can NISC foster the development and application of innovative tools and technologies to enable the prevention, eradication, and control of invasive species in a more timely and effective manner?”

In order to address this question, NISC and ISAC need to first address the question, “What is an ‘invasive species’?”

‘Invasive species’ have frequently provided a reason for dispersing toxic chemicals in the environment, often with a sense of urgency and an assumed indisputable benefit. This unsupported (and sometimes unstated) assertion of benefit is a claim to virtue that allows environmental harm instead of preventing it.

In the context of other federal, state, and local laws, the regulatory definition of ‘invasive species’ gives broad authority to agencies to use all means at their disposal to rid the jurisdiction of non-native organisms causing economic harm, as well as harm to health and the environment. Many local ordinances that ban or restrict pesticide use make an exception for ‘invasive species,’ presumably under the mistaken assumption that in doing so they are protecting the environment. Instead, they are allowing environmental harm through the spread of toxic substances.

The use of the term ‘invasive species’ as a claim to virtue that is used to promote any and every attempt to exterminate any unwanted organisms is very disturbing. It is important to understand the problems that lead to the use of toxic chemicals, beginning with the cause. In the case of situations involving so-called ‘invasive species,’ we find that few, if any, involve species that are truly ecologically invasive—that is, capable of invading and persisting in intact ecosystems. Instead, such situations usually involve species that can take advantage of disturbed habitats (‘weeds’ or ‘weedy species’). As such, the emphasis should be placed on healing the disturbance (to which end, so-called ‘invasives’ may sometimes be helpful), rather than killing the opportunist colonizer.

We do not take the position that such opportunist colonizers should never be removed or managed. We do believe that the decision concerning whether such action should be taken should be based on the situation at hand and not on a claim to virtue that makes extermination of non-natives a righteous cause.

Redefining ‘invasive species’ to be limited to those species that can invade and damage intact ecological communities will directly ‘foster the development and application of innovative tools and technologies to enable the prevention, eradication, and control of invasive species in a more timely and effective manner’ (NISC) because resources will be directed only at those species that truly present an ecological threat. It will prevent those resources from being squandered in ways that are ecologically destructive.

The sharper focus that this redefinition will bring to the NISC and ASIC will enable them to explore approaches such as those that Beyond Pesticides has used in working with National Parks, local governments, and tribes to manage ecological problems in a way that is truly protective of biodiversity.”

Terry Shistar, Ph.D.
Board of Directors
Beyond Pesticides

Beyond Pesticides will soon hold its annual forum in Irvine, California, April 13-14, 2018.  As usual, the forum will include highly qualified speakers who are knowledgeable about so-called “invasive species,” and the evolutionary principles that raise questions about the necessity and futility of trying to eradicate them.   Two of the speakers are important to our local effort to stop the use of pesticides to eradicate non-native plant species:  Dr. Scott Carroll and Professor Tyrone Hayes.

Dr. Scott Carroll is an evolutionary biologist affiliated with UC Davis.  He has published several influential studies about the speed of adaptation and evolution that enables introduced plants to join native ecosystems without long-term negative consequences of their introduction.  He has coined the concept of “Conciliation Biology,” which advocates that we turn from efforts to eradicate non-native species in favor of a new approach which manages the co-existence of native and non-native species. 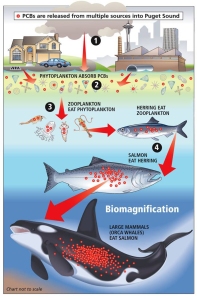 Professor Tyrone Hayes (UC Berkeley) is best known for his criticism of the herbicide, atrazine, which is harmful to the frogs that he studies.  Unfortunately, Professor Hayes’ opposition to atrazine does not extend to the pesticides being used in the San Francisco Bay Area to eradicate non-native trees and prevent them from resprouting.  Professor Hayes accepts the premise that eucalyptus trees are detrimental to native plants, which justifies the use of herbicides to destroy them, in his opinion.  The herbicide that is used for that purpose (Garlon with active ingredient triclopyr) is just as toxic as atrazine.  Both are organochlorine products that bioaccumulate, persist in the environment for decades, and are endocrine disruptors.

The Beyond Pesticides forum is likely to generate some lively discussion of the issues that are relevant in the San Francisco Bay Area.  Details about the conference are available HERE.  Beyond Pesticides makes every effort to make these forums affordable for activists.  I have attended two of these conferences.  They were excellent opportunities to learn more about pesticides, to meet other activists, and to get ideas about how to advocate more effectively for more responsible pesticide use in our community.

I am very grateful to Beyond Pesticides for their leadership in the effort to reduce pesticide use in the United States.  They are a reliable source of information about pesticides and their activism is an inspiration to those who are engaged in this effort on a local level.

One thought on “Beyond Pesticides: The voice of reason about pesticides”