Although the Environmental Protection Agency requires that pesticides be tested before they can be sold in the US, we know that the required tests are inadequate to determine if the pesticide is dangerous to human health and the environment.  The tests are only as accurate as the test protocols and procedures.  There are many flaws in the testing methods required by federal law.  Here are a few of them:

What is a trophic cascade?

A change in the population of one member of an ecosystem can trigger a trophic cascade by altering the balance of the entire food web. 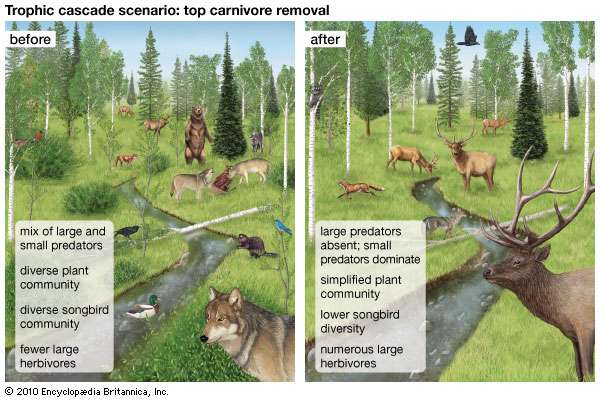 The classic example of a “top-down” trophic cascade is the sequence of events in Yellowstone National Park when wolves were exterminated in the park.  In the absence of the top predator in the ecosystem, the population of elk that were their prey exploded.  The grazing animals ate trees and shrubs that were the food of the beavers.  The beaver population declined, which altered the hydrology of the ecosystem.  Wetlands maintained by beaver dams dried up and the community of plants and animals in the wetlands died off.  Although there were other predators of the grazing animals, such as bears and mountain lions, the packs of wolves subjected the herds of grazing animals to harassment that kept them moving, reducing damage to the vegetation.

Wolves have returned to Yellowstone National Park because of the Endangered Species Act that protected them and the ecosystem has been restored by the natural forces of predator and prey relationships.  The endangered status that protected wolves was recently rescinded in response to the demands of ranchers with domesticated animals.  Although wolves may not be killed inside Yellowstone, they may be killed when they leave the park.  We may eventually see a reversal of the improvements in an ecosystem ruled by wolves.

Marris details the lack of data supporting the existence of a trophic cascade or its reversal when wolves were reintroduced.  She calls those claims speculative, an unproven hypothesis.  More importantly, Marris believes that proof of that hypothesis is unattainable:  “…even ecosystems as well studied as Yellowstone remain beyond our ken…lifetimes will be required to understand them and even then they may always remain, by virtue of changing faster than we are able to follow, essentially unknowable.”

More humility is needed to guide conservation.  If we are to avoid damaging the environment further, we need to keep in mind how little we know.  Nature may be far wiser in managing itself than humans presume to be.

There are also examples of “bottom-up” trophic cascades when increases or decreases in the abundance of microscopic plants and animals disrupt the entire food web, ultimately impacting the top of the food chain.

Insects are also near the bottom of the food chain.  They are essential food for birds, particularly to young nestlings.  Scientists began noticing that insect populations were disappearing some time ago, but their anecdotal observations were not empirically tested until 2016 when an entomological society in Germany published a study about the decline:  “The German study found that, measured simply by weight, the overall abundance of flying insects in German nature reserves had decreased by 75 percent over just 27 years.” (3)  Although there are undoubtedly many reasons for this rapid disappearance of insects, including pesticides, there is almost no research being done to determine the causes:  “Rob Dunn, an entomologist at North Carolina State University…recently searched for studies showing the effect of pesticide spraying on the quantity of insects living in nearby forests.  He was surprised to find that no such studies existed.  ‘We ignored really basic questions,’ he said.  ‘It feels like we’ve dropped the ball in some giant collective way.’” (3)  Professor Dunn should not feel badly.  Almost no research is being done on the effects of pesticides on anyone, any animal or anything in the environment  Turning a blind eye to the possibility of such harm done by pesticides is one of the ways in which the industry is shielded from regulation.

The review article published by Beyond Pesticides reports that many empirical studies have discovered trophic cascades initiated by pesticide applications.  Here is one example from agriculture:

“Mesleard et al. (2005) found that the insecticide fipronil, used to control midge pests in conventional rice fields, causes a trophic cascade that reduces the nutritional value of the area for waterfowl. Comparing a chemical intensive rice field to one managed organically, the trophic cascade ultimately neutralized the efficacy of synthetic pesticide use in the first place.

“Direct toxicity from fipronil reduced the number of invertebrate predators in chemical-intensive rice fields. This led to a trophic cascade that allowed herbivorous animals to flourish. On the surface, organic and chemically-managed rice fields both contained the same amount of invertebrate biomass. However, in chemical-intensive fields, this biomass was primarily in the form of gastropods (snails and slugs). When researchers surveyed the fields in late summer, only 12% of the invertebrate community were predators, while in organic fields that proportion was 70%. Slugs and snails are not a major food source for the most common waterfowl in the region studied, the heron, making organic plots a more valuable source of sustenance.” (2)

The review article also provides examples of trophic cascades initiated by pesticides in aquatic environments and in “invasive species” control projects.  Both herbicides and insecticides have initiated trophic cascades.  The effect on the food web of one pesticide is sometimes different from another.  The timing of a pesticide application sometimes has different impacts on the food web.  The effects of pesticides vary widely and are very complex.

A local example of a trophic cascade

There are many aquatic weeds in the Delta where the Sacramento and San Joaquin rivers slowly meander into the San Francisco Bay.  The weeds come from warmer climates and they are thriving here because of climate change.  Lower water levels are also a factor because shallower water is warmer.  The water level is lower because of drought and the diversion of water from the rivers and the Delta to irrigate agricultural crops.  Annual spring floods that cleansed the Delta system in the distant past have been stopped by upstream dams that keep water levels constant.

Instead of addressing the underlying reasons why the aquatic weeds have become a problem, the powers that be (State Parks Division of Boating and Waterways and approved by US Fish & Wildlife Service) have been spraying the aquatic weeds with pesticide and dumping pesticide pellets into the water.  These pesticide applications have been steadily increasing:  “Charts provided by the state show a 50 percent hike in the amount of pellets used from 2014 to 2017 and a 66 percent increase in the amount of spray that was administered during the same time period.”

Fortunately, there are thousands of fishermen in the Delta who have noticed massive die-offs of fish, turtles, goats, ducks, muskrats, and otters since the spring. They have reported these deaths to California State Parks, who deny knowledge of such die-offs.

The fishermen have formed an organization, Norcal Delta Anglers Coalition.  They have organized to document this trophic cascade that was probably initiated by unnecessary pesticide applications.  We wish them luck.  We hope they have more success than we have had convincing public land managers that they are damaging the environment and its inhabitants with pesticides.

Testing and evaluation of pesticides must be improved

This important review article (1) concludes that pesticides can upset and imbalance ecosystem health and stability.  Studies find “increased risk of disease transmission, dangers to declining species, algae blooms, the loss of ecosystem services like nutrient cycling, and importantly, ineffective pest management.”  Therefore, there is a “critical need for EPA to consistently assess ecosystem level trophic effects as part of the pesticide registration process.” In the absence of a truly precautionary system where independent science is adequately considered by regulators, pesticides are likely to cause trophic cascades or other ecosystem disruption.

Such ecosystem evaluations of pesticides are not going to happen in the foreseeable future.  The 180-degree turn in American politics that would be required to improve pesticide regulation is unlikely.  Although most of the meager federal regulation we had in place prior to 2017 has been dismantled, regulation in the prior administration was also inadequate.

Therefore, our fallback position should be DON’T USE ANY MORE PESTICIDE THAN ABSOLUTELY NECESSARY.  Buy organic food to protect your family and to put industrial agriculture using pesticides out of business.  Fight for rigorous pesticide regulation locally, in your city, your county and your state.

The end of another nativist myth

Furthermore, killing one plant or animal in an ecosystem ultimately effects the entire community of plants and animals.  The collateral damage to the entire ecosystem caused by pesticides can be devastating to the entire food web.  Clearly the word “restoration” is a misnomer when used to describe eradication projects using pesticides.

Given the inevitable damage to entire ecosystems, the claim that native plant “restorations” benefit wildlife is clearly unlikely, if not patently false.

One thought on “Trophic cascades are initiated by pesticide use”