New York State agencies have been trying to destroy the Piermont Marsh since 2013, because most of the marsh grass is not native. Piermont Marsh is adjacent to the small village of Piermont on the west side of the Hudson River, less than 30 miles north of New York City. 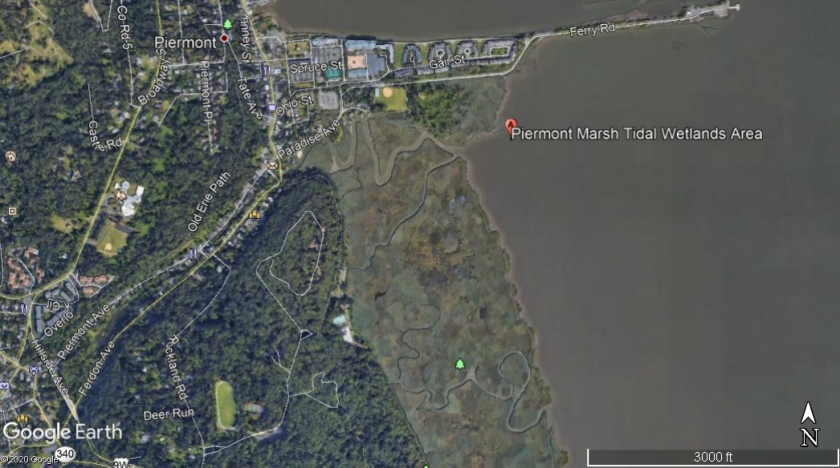 The community of Piermont organized to prevent the destruction of their marsh for two reasons:

I have followed the attempt to save the Piermont Marsh because it is nearly identical to our West Coast version of the same issue.  Non-native spartina grass has been nearly eradicated on the entire West Coast using herbicides over the past 15 years.  After witnessing the unintended consequences of the eradication of spartina, I was sympathetic to the community of Piermont and hopeful that their organized resistance might be successful.

Opposition to the proposed project to destroy the Piermont Marsh has accomplished a great deal.  The first round of public comment and negotiation resulted in a reduction in the size of the project from 200 acres to 40 acres.  The Piermont community was also given a commitment to conduct an analysis of the damage done to the village by the destructive storm surge in the 2011 hurricane Sandy to determine the role the marsh played in protecting the village from even greater damage.

The scientist who conducted that study reported the results of the study in July 2020.  He concluded that “the presence of the Marsh is estimated to have avoided $902,000 worth of property damage and loss.” (1) He made other significant observations:

For the moment, the Piermont Marsh project is on hold:  “[The plan] will be redrafted and the new draft should be presented to the public in 2021.” (1) Meanwhile, herbicides will not be used in the marsh and experiments will be conducted to kill marsh grass by covering it with a geotextile that deprives the vegetation of light.  However, project managers have not made a commitment to avoid herbicides in the future.

Based on my experience with opposition to such destructive projects,  delays are often ultimately victories.  Funding priorities often change and more scientific information becomes available to inform a better decision.  For example, the current draft plan contains outdated information about glyphosate.  It claims that “Glyphosate is a non-selective, systemic herbicide that controls weeds by inhibiting a specific pathway for amino acid synthesis that is unique to plants and not present in animals.”

We now know that the claim about a “unique pathway” for glyphosate existing only in plants is not true.  In 2020, plaintiffs in a class-action suit against Monsanto alleging that it falsely advertised that the active ingredient in Roundup only affects plants were awarded $39.5 million.  The settlement also requires that the inaccurate claim be removed from the labels of all glyphosate products: “…[plaintiff] says Monsanto falsely claimed through its labeling that glyphosate, the active ingredient in Roundup, targets an enzyme that is only found in plants and would therefore not affect people or pets. According to the suit, that enzyme is in fact found in people and pets and is critical to maintaining the immune system, digestion and brain function.”

In defense of phragmites

According to a study conducted in 2017, phragmites is playing the same ecological roles as their native predecessors:

“An invasive species of marsh grass that spreads, kudzu-like, throughout North American wetlands, may provide similar benefits to protected wetlands as native marsh grasses. According to new research from North Carolina State University, the invasive marsh grass’s effects on carbon storage, erosion prevention and plant diversity in protected wetlands are neutral… studies have shown that Phragmites may help reduce shoreline erosion in marshlands and store carbon at faster rates than native grasses…The team found no significant differences between ecosystem services of the marshes they studied, indicating that Phragmites’ effect was largely neutral.”

Land managers and contractors have been trying to eradicate phragmites in the Delaware River and its estuary for nearly 40 years.  Although the contractors are still committed to that project, critics are getting louder and scientists are finding more evidence of the benefits of phragmites.  It is no longer clear that eradicating phragmites is possible, nor is it clear that it would be beneficial.

Rising sea levels as ice melts in warmer temperatures are bringing the benefits of phragmites into focus:  “Some scientists have been arguing that phragmites…could be a key line of defense against rising sea level, particularly in areas like the Mid-Atlantic where land is sinking while water continues to rise… Research from 20 years ago found that phragmites help marshes elevate faster than some other plants…”

The herbicides used to kill phragmites are aerial sprayed from helicopters, killing both native and non-native plants, resulting in barren mudflats that are more vulnerable to erosion:  “The herbicide treatment of phragmites can also mean other native plants become casualties in the process, leaving an unvegetated landscape behind. With no plants to hold sediment in place, an open mudflat can be extremely vulnerable to flooding in the face of storms or unsuccessful regrowth… ‘You know, the Phrag marsh is certainly a whole lot better than no marsh,’ [a Rutgers scientist] said.”

Trying to eradicate phragmites no longer makes sense.  So why is it continuing to happen?  A Rutgers marine biologist explains:   “Well, might I say…there’s a whole army of environmental consultants that get paid to remove phragmites and don’t get paid to leave it alone.”  That is really the heart of the matter.  The projects are designed to create jobs and apply for government funds, not to protect the environment.

If the word “spartina” is substituted for the word “phragmites” the Piermont Marsh project and the questions it raises apply to similar projects on the West Coast.  For over 15 years, non-native spartina marsh grass has been eradicated using herbicides along the entire West Coast.  The result of spartina eradication projects on the West Coast is also barren mud shoreline that is poisoned with herbicide and miles of coastline that is vulnerable to rising sea levels and erosion.

These eradication projects don’t make any more sense on the West Coast than their mirror image on the East Coast.