“The way out of the depression and grief and guilt of the carbon cul-de-sac we have driven down is to contemplate the world without us. To know that the Earth, that life, will continue its evolutionary journey in all its mystery and wonder.” — Ben Rawlence in The Treeline 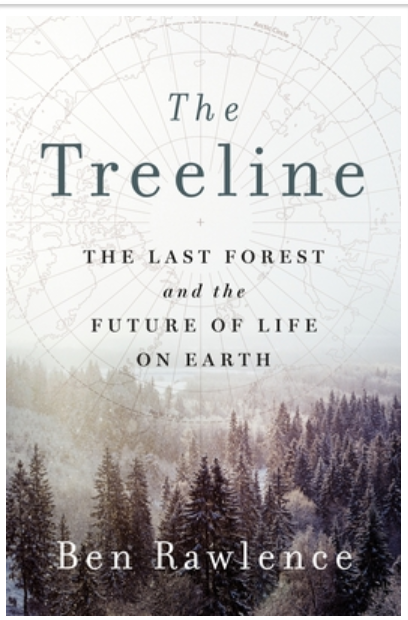 Ben Rawlence, the author of The Treeline:  The Last Forest and the Future of Life on Earth, visited forests in Arctic regions to report the impact of climate change on forests and indigenous communities who inhabit those regions.  The climate is changing more drastically and quickly in Arctic regions, compared to temperate regions because rapidly melting ice is no longer reflecting light back into the atmosphere.  The dark ocean waters and forest canopy are absorbing heat, accelerating global warming.  As ice retreats on land and melts into oceans, mosses and lichens grow on bared ground and the forest spreads northward aided by elevated levels of carbon dioxide, which increases photosynthesis, boosting plant growth.

As forests advance north, hybridization enables the selection of the species best adapted to the changed and rapidly changing conditions:  “Sorbus are found all around the boreal region, from Scandinavia to Siberia, and everywhere have shown an ability to adapt by hybridizing vigorously. The capacity to hybridize is a survival strategy, a useful skill for the Anthropocene, and the rowan is a survivor par excellence.” (1)

While forests advance north, the southern edge of forests in northern latitudes is dying in the warming climate from drought, wildfires, insects and pathogens that are fostered by warmer temperatures.  Where permafrost is melting in warming temperatures, trees are drowning in water. Boreal forests in Arctic regions are a pock-marked mosaic of dead and dying trees, burned skeletons in some places, standing dead, clothed in brown canopies in other places.

These changes in vegetation have an impact on every other living inhabitant of Arctic regions.  Where vast herds of caribou and reindeer lived in the past and indigenous people migrated to follow them, changes in vegetation have drastically reduced their numbers.  Where winter snow was dry and crisp in the past, reindeer could dig to find lichen that sustained them during the winter.  Snow is wetter during warmer winters and episodically freezes to form a hard crust, making lichen inaccessible to reindeer.

Indigenous people such as Sámi in Norway and Nganasen in Siberia no longer migrate to follow reindeer herds.  Rawlence visits these communities and reports that they are fatalistic about the changes in the environment.  They understand why their lives have changed and they anticipate more changes in the future, but they also understand that they are powerless to change this trajectory.  Inuits in Alaska must periodically move homes to escape rising sea levels, yet they support the development of fossil fuels in Alaska because their primary source of income is tax revenue from the fossil fuel industry:  “Sure, there’s change.  There are cherry trees in Fairbanks.  But everyone has five hundred dollars a month in their pockets.  We haven’t paid state income tax for thirty years and there’s zero unemployment.  It still looks pretty nice.” (1)  Rawlence calls this the hydrocarbon compromise.

Those who live in temperate regions, such as the US, might wonder what these changes in Arctic regions have to do with us.  Out of sight, out of mind.  Those who are inclined to shrug at the news about the Arctic would be wise to read The Treeline to understand the impact of changes in the Arctic on the entire world.

Rising sea levels are the most immediate and obvious consequence of melting ice sheets and glaciers as well as warming ocean temperatures.  Water trapped in ice and snow is fresh water.  Adding fresh water to the oceans lowers salinity with consequences for the circulation of nutrients in the ocean:  “Siberia’s rivers are discharging 15 percent more water into the ocean than a decade ago…This seems to be changing the salinity of the Arctic Ocean, and may in turn affect the Arctic pump.  This is the process by which salty water sinks to the bottom, causing a cycle in which the deeper water mixes with nutrients from the sea floor and rises again to the surface feed phytoplankton.”  Phytoplankton are the foundation of the marine food web:  “This stimulation of plankton growth is also the reason the entry points to the Arctic Ocean…are among the richest feeding grounds on earth for marine animals and birds.” (1)

As forests die in riparian corridors that feed into the ocean, phytoplankton are also robbed of the iron needed to reproduce and divide:  “Iron made available by trees is the foundation of the food web in the ocean.” (1)

The seasonal pulse of oxygen in the spring when deciduous trees leaf out is muddled by unseasonal heat that suppresses photosynthesis.  Trees close the pores of their leaves (stomata) to reduce the loss of moisture as protection against the heat, which stops photosynthesis, in turn stopping the conversion of carbon dioxide to oxygen.  Tree growth stops without photosynthesis.  Seasonal patterns of life are disrupted such as the nesting season of birds and the availability of insects that must coincide with nesting season for reproductive success.  The daily pulse of temperatures from day to night is shallow and indistinct.   Warmer nights no longer provide a respite from the stress caused by high heat during the day.

Long before the last ice age that ended about 10,000 years ago, northern latitudes now dominated by ice were covered in dense forest.  The remains of those forests now buried by ice are frozen peatlands called permafrost. Carbon stored by plants during their lifetimes is returned to the atmosphere when the plant dies and decomposes in dry climates.  Peatlands are unique in accumulating carbon in layers of dead vegetation that does not decompose in the watery bogs that limit surface oxygen.  “Canada’s Hudson Bay Lowlands, the largest intact peatland in the world, stores as much as five times more carbon than the equivalent area in the Amazon rainforest.” (2)

Warming temperatures and wildfires in the boreal forests of Canada, Alaska, and Siberia are thawing permafrost, destabilizing infrastructure such as roads and gas pipelines.  According to Rawlence, Conoco Phillips, which is drilling for oil in Alaska, is refrigerating permafrost to prevent fracturing their pipelines.

The nightmare scenario that could be triggered by the sudden release of carbon dioxide and methane by thawing permafrost in Siberia, is described by a Dutch climate scientist in The Treeline: “There is twice as much greenhouse gas—carbon dioxide, methane, and nitrous oxide—stored in the permafrost as currently is in the atmosphere, enough to accelerate warming exponentially and effectively end life on earth as we know it if it were released at once…’The larger public still thinks that climate change will be gradual.  They are not alive to the fact that it will be abrupt and what that means in terms of climate disasters and the suffering of our children.’” (1)

The author of The Treeline, Ben Rawlence, is a British writer.  His previous books were Radio Congo: Signals of Hope From Africa’s Deadliest War about civil war in Congo and City of Thorns: Nine Lives in the World’s Largest Refugee Camp about a refugee camp in Somalia.  He was a researcher for the Africa division of Human Rights Watch.  He is not a trained ecologist or botanist.

The Treeline reflects Rawlence’s background and lack of background.  He is passionate about the dire consequences of climate change, but his inadequate botanical knowledge requires readers to beware. Professor Art Shapiro wrote a review available on Amazon that details some of the inaccuracies in The Treeline and puts these issues in perspective:  “Reading this book is like listening to a great symphony while one instrument, say an oboe, is infuriatingly out of tune.” (3) I took Professor Shapiro’s advice and read The Treeline for the big picture, not for the details, of which many are speculative in any case. Our understanding of the consequences of climate change is imperfect. Still, I believe The Treeline is well worth reading and Rawlence’s elegant writing is also a reward.