The few projects that are successful are usually fenced, irrigated, and intensively planted and weeded.  Few managers of public lands have the resources to achieve success.  We have identified here on the Million Trees blog many reasons why attempts to return native plants to places in the Bay Area where they have not existed for over 100 years are often failures.  Many of those reasons are related to the changes in the environment:

The methods used by the projects undermine success

With the exception of the project on Mount Sutro in San Francisco, all of the projects use herbicides to eradicate the non-native plants and trees.  Most of the non-native trees will resprout if their stumps are not sprayed immediately with herbicide and this must be done repeatedly to kill the roots of the trees.  Many of these herbicides persist in the ground for years and probably suppress subsequent plant growth.

This problem is illustrated by a USDA study of the effects of a one-time aerial spraying of herbicides on grassland after 16 years.  Although the herbicide is assumed to “dissipate” within a few years, the negative effect on the natives persisted 16 years later:  “…the invasive leafy spurge may have ultimately increased due to spraying.  Conversely, several desirable native herbs were still suffering the effects of the spraying,,,”

Anyone who is familiar with native plant restorations in the Bay Area knows that most are covered in a thick layer of mulch.  When tree removals are required for a project, the mulch is usually composed of the chips of the trees that have been cut down.  The projects of UC Berkeley for which UC is applying for FEMA funding (based on its claim that the clear-cutting of all non-native trees will reduce fire hazards) say specifically that the clear-cut areas will be covered with 24 inches of mulch composed of the chips of the destroyed trees.

The UC Berkeley projects also claim that native vegetation will return to these clear-cut areas without being planted based on an assumption that the seeds of native plants are dormant in the soil.  One wonders how these seeds would be able to germinate when covered with 24 inches of mulch, or how the sprouts could penetrate it.  Their proposal contains the fanciful suggestion that squirrels will plant the acorns of oaks in the mulch, which may be true of the oaks, but is an unlikely scenario for the many other native plants and trees which UC claims will populate their “restorations” without being planted.

These heavy mulches prevent native bees from nesting in the ground, as most native bees do.  This reduces the population of pollinators which are essential to the germination of a new generation of the plants.  If long-term sustainability is the goal of these projects, an environment that is friendlier to pollinators would be helpful.

Lack of horticultural knowledge is also handicapping these projects

The managers of these projects are apparently unaware of the fact that hundreds of species of California native plants require fire to germinate their seeds and that most of the population will die within 5 years of the fire. (3) These are examples of such “pyroendemics” that sprout after a fire and are almost entirely gone within 5 years: 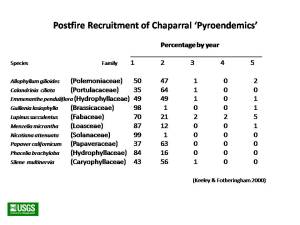 UC Berkeley and East Bay Regional Park District do not plan to plant any natives after eradicating non-native plants and trees.  Their plans say that they expect seeds that are dormant in the ground to sprout when the ground is cleared of non-native plants.  Unless they set fire to that ground, many seeds will not germinate and most of the plants that are germinated by that fire will disappear within 5 years unless another fire germinates another generation of plants.

UC Berkeley does not use prescribed burns on its property.  East Bay Regional Park District (EBRPD) conducts only a handful of small prescribed burns every year, which they claim are solely for the purpose of reducing fuel loads.  In an article about prescribed burns conducted by EBRPD, the District’s “Resource Analyst” is quoted as saying, “’This is not a restoration project.  Our primary goal is fuels reduction.’” (4) Ironically, both of these owners of public lands claim that their objective in the eradication of non-native plants is to reduce fire hazard, yet they are trying to reintroduce a landscape that is dependent upon fire for survival.

The Natural Areas Program in San Francisco has never conducted a prescribed burn and the DRAFT Environmental Impact Report for their plan says they do not intend to do so in the future.

New and growing evidence that soil is altered by plants

In addition to these issues which have contributed to the failed attempts to reintroduce an historical landscape to the San Francisco Bay Area, we are reporting today on a new issue.  Plants can change the microbial composition of the soil, including mycorrhizal fungi which have symbiotic relationships with plants.

Researchers tested soil for changes in composition after just three growth cycles.  Several species of non-native annual grasses were grown in native soils.  They reported that the non-native species reduced the population and changed the composition of the mycorrhizal fungi, which reduced the ability of native species to establish and persist in modified soils. (5)

These changes in the soil were observed after only three growth cycles.  Our local projects are attempting to eradicate plants which occupied the soil for more than 100 years.  In some cases such as the former garbage dumps in the East Bay on landfill, the soil was never occupied by native plants.  Surely, the alteration of soil composition is a likely factor in the failure of attempts to turn these properties into native plant gardens.

How many more decades and how much more taxpayers’ money must we spend on these projects before land managers acknowledge their failures?

2 thoughts on “Why are native plant installations often failures?”