Today we will take a deep dive into evolutionary history to talk about the origins of life on Earth.  Drawing from David Quammen’s new book, The Tangled Tree, we will tell you about “a radical new history of life,” as promised by the subtitle of his book. (1)

Throughout written history, humans have demonstrated a compelling need to name and categorize everything in our world, including nature.  Naming and categorizing passes for understanding and enables us to talk about issues using commonly understood definitions.

Linnaean taxonomy was one of the first and most influential attempts to classify the natural world into three kingdoms:  plants, animals, and minerals.  Since Systema naturae was published by Carl Linnaeus in the 18th century, many other classification systems have been proposed by subsequent generations of scientists.

The conventional wisdom about classifying nature changed radically after the discovery of the molecular structure of DNA in the 1950s and the molecular analysis that it enabled in the 1960s.  Genetic analysis revealed the evolutionary relationships between organisms, enabling the development of phylogenetic “trees” depicting those relationships.

The revolutionary work of Charles Darwin was instrumental in initiating such speculation about evolutionary history.  Such theories about the history of life on Earth were often depicted as “trees of life,” showing the progression of evolution.  One of the earliest of such “trees” was published in the 1870s, shortly after the publication of Darwin’s Origin of Species in 1859.

In 1977, using molecular analysis, Carl Woese published his hypothesis of a new kingdom of life, Archaea.  He proposed a new categorization of all life on Earth, which he called domains:  Bacteria, Archaea, Eucarya.  Bacteria and Archaea are one-celled organisms without a nucleus.  Eucarya are every other living organism, including plants, animals, and fungi. Kingdoms of life were relegated to the second level of taxonomy (the classification of organisms).

The hypothesis of Woese was challenged, often contentiously, for decades, but is now conventional wisdom among scientists of phylogenetics, as the genetics of evolution is called.  However, as tidy as these new categories might appear, they aren’t.  As human intellectual constructs often are, many species of life defy neat categorization.  Around the edges of every domain there are many species of life that don’t entirely fit the criteria.  Likewise, around the edges of every genus and species, there are many gray areas.  Just as the distinction between “native” and “non-native” is often ambiguous, so is the categorization of many organisms.  This is a reminder that we must use such definitions with humility, always being prepared to consider a new hypothesis that improves our understanding.

Revising the mechanisms of evolution

Molecular analysis has also radically altered our understanding of how evolution proceeds.  Charles Darwin’s hypothesis about evolution was that change in organisms occurs through genetic variation from one generation to the next.  Occasional genetic mutations from one generation to the next was later added to what is called “vertical evolution.”  Each subsequent generation of a species is tested by the environment and that test is called natural selection.  The individual member of a species that is best adapted to the environment survives to reproduce, while less well-adapted individuals do not survive to reproduce.

Scientists have more recently observed that species in one domain of life also exchange genetic material with another domain of life, as well as exchanges between different species within domains.  This is called “horizontal gene transfer.”  The discovery of horizontal gene transfer (HGT) has revolutionized how we think about evolution.  Natural selection remains as the mechanism that confers success or failure on such changes in genes from one generation to another. 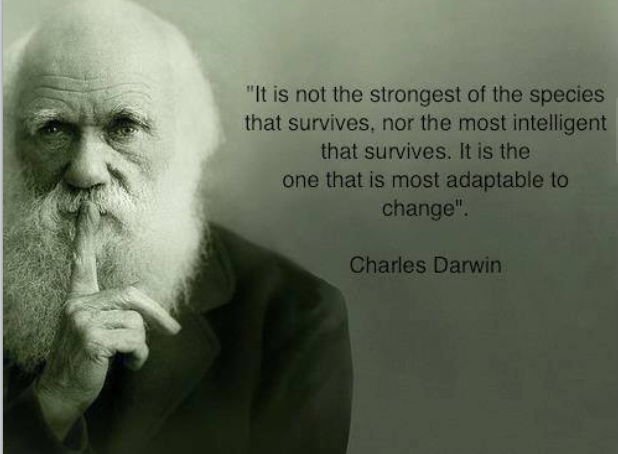 The introduction of chloroplasts into plant cells roughly 3.5 billion years ago was one of the most significant events in the evolution of life on Earth.  The introduction of chloroplasts into plant cells was an example of a horizontal gene transfer from a bacteria cell into eucarya cells.  Chloroplasts are the organelles (specialized structures inside eucarya cells that perform specific functions) that perform photosynthesis in plant cells.  Photosynthesis enables plants to convert the energy of the sun into carbohydrates that feed the plant and emit oxygen as its waste product.  Photosynthesis converts carbon dioxide into oxygen.  This neat trick of photosynthesis radically altered the atmosphere by reducing carbon dioxide and increasing oxygen.  Just as increased carbon dioxide in the atmosphere is now increasing temperatures on Earth, lower carbon dioxide levels in the atmosphere reduced temperatures.  This so-called “Great Oxidization Event” was the probable cause of one of the five great extinctions hundreds of millions of years ago. (3)

The horizontal gene transfer of mitochondria from bacteria cells to eucarya cells was equally significant to the evolution of life on Earth.  Mitochondria are organelles in eucarya cells that perform respiration and energy production functions in most eucarya species of both plants and animals. (2)

The list of such horizontal gene transfers is long.  Here are some examples to help you understand that HGT is an extremely important evolutionary mechanism, perhaps even more important than vertical evolution (2):

Our bodies contain more microbes, such as bacteria, than they do human cells.  Those microbes are interacting with our own cells.  Sometimes the microbes cause problems and sometimes they solve problems.  The microbes in our bodies cannot be called enemies or friends.  Sometimes their interactions with our cells permanently alter our genes and are inherited by our offspring.  Such permanent alterations of our genes are called horizontal gene transfer.  Such interactions between microbes and cells occurs in all life forms, altering plants, animals, etc.

What are the implications of these interactions?

5 thoughts on “All life on Earth is related”