It’s spring.  Have you noticed that the birds are singing?  This is the time of year when they are most vocal.  They are staking out their nesting sites and attracting their mates with their songs.  They are quieter when they have laid their eggs as they try to avoid detection.  Migratory birds are also passing through, on their way to their breeding homes.  The food they find along the way is important to their survival on their long and physically challenging journeys from their winter to their summer homes.

Subscribers to Wildcare recently received an email newsletter reminding them that pruning trees and shrubs at this time of year is dangerous for the birds that are hiding their nests in them.  Wildcare is a local organization which treats sick or injured animals and educates the public about “how to live peacefully with wildlife.”

We were recently reminded of the vulnerability of birds at this time of year in our own yard when a hummingbird selected our flowering, non-native Victorian Box tree (Pittosporum undulatum) to build her nest.  Her nest was completely invisible to us, but we spotted her darting in and out of it as she built her nest.  We were able to take this picture of her sitting on her nest by crawling into the understory of the tree.

Then disaster struck.  An early spring storm tore a huge branch from the tree and sent her nest tumbling to the ground.  We watched with heavy hearts while the hummingbird made anxious, noisy flights into the fallen branch.  When she gave up, we carefully lifted the fallen branch to find her tiny, empty nest.  As sad as this event was in our lives and hers, at least we knew that the failure of her nest was no fault of ours.   San Francisco’s Natural Areas Program cannot say the same of their destructive project in Glen Canyon Park.

The Natural Areas Program began to destroy the non-native vegetation in Glen Canyon Park in San Francisco in November 2011.  In addition to destroying valuable habitat with chainsaws, they also sprayed herbicides.  The San Francisco Forest Alliance (SFFA) protested this destructive project many times but it has continued unabated to as recently as April 27, 2012, when they pruned trees and sprayed herbicides.

Earlier in April, SFFA learned from a public records request that this project violated a legal commitment to the California Department of Fish & Game.  The Natural Areas Program made the following commitment to mitigate harm to wildlife in Glen Canyon Park in its Streambed Alteration Permit:

“It is the policy of RPD’s Natural Areas Program that no new projects will begin during the breeding season (December to May).  Follow up work in previously cleared areas may be done during the breeding season, however, because areas will have been cleared previously. Wildlife will not likely be using these areas for breeding.  This protocol has been effective in reducing impacts to breeding wildlife.”

SFFA brought this violation of its commitment to the attention of the General Manager of the Recreation and Park Department immediately.  The head of the Natural Areas Program said that the violation was necessary because the grant funding for the project was about to expire.  To avoid losing the funding for the project, the birds and animals of Glen Canyon Park were subjected to this destructive project during their breeding and nesting season.

SFFA has brought this violation to the attention of the California Department of Fish & Game.  Their regulations require them to enforce the terms of the Streambed Alteration Permit, including the mitigation of potential harm to wildlife.  Violations of the terms of the permit are subject to “civil penalties” according to the regulations:  “A person who violates this chapter is subject to a civil penalty of not more than twenty-five thousand dollars ($25,000) for each violation.” 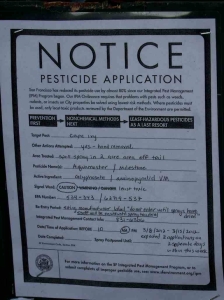 One month after SFFA informed California Department of Fish & Game of the violation, nothing seems to be done about it.  In fact, weeks after SFFA sent this information to Fish & Game, another episode of destruction occurred in Glen Canyon Park on April 27, 2012.

The consequences of native plant “restorations” to wildlife

We will never know how many birds and animals were harmed by the destruction in Glen Canyon Park.  The management plan for the Natural Areas Program tells us (Appendix D) there are 18 species of birds that are found in and/or breed in Glen Canyon Park that are considered “Species of Local Concern.”  That is, the Audubon Society considers them rare in San Francisco.

We also know that migratory birds will find less food in Glen Canyon Park this year than they have found in the past as they pass through San Francisco on their way to their breeding homes.  Many of the flowering and berry producing non-native plants that have thrived in Glen Canyon Park in the past have been destroyed by this destructive project, which is described by the Natural Areas Program in its Streambed Alteration Permit application as “…the ‘Scorched Earth’ method, in which all above-ground vegetation including natives, are removed.”

Ironically, this project was partially funded by a grant program of the State of California entitled “Habitat Conservation Fund.”  We believe this project was a grotesque misuse of this fund.  The wildlife of Glen Canyon Park did not benefit from this project.  In fact, we believe they have been harmed by it.