Islands are intensively studied by ecologists because they are hothouses for evolution.  Physical isolation results in the evolution of new species that are related to their mainland ancestors and the result is many endemic species of plants and animals which exist only on that island.

Some islands originated when continents broke up into smaller pieces as a result of continental drift.  Madagascar and New Zealand are examples of islands that were originally attached to a continent.  These islands brought some of the inhabitants of the continent with them.  But many islands arose from the ocean as a result of volcanic activity and were therefore born bare as a newborn babe without vegetation or inhabitants.  All subsequent life on these volcanic islands arrived by dispersal from elsewhere via ocean currents, winds, or carried by traveling animals, most recently by humans. 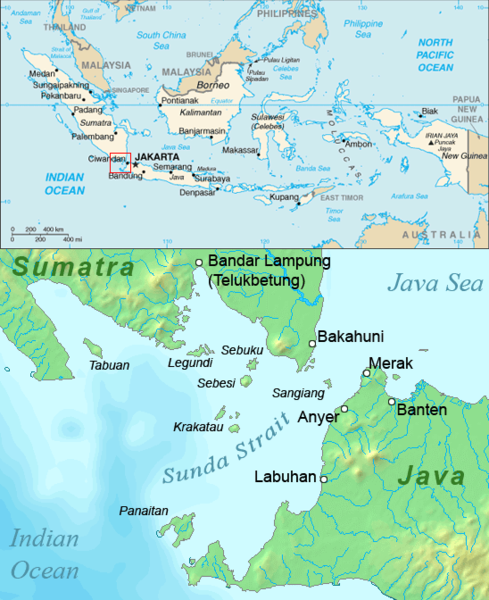 Krakatoa is such a volcanic island in the Indonesian archipelago.  It has a long record of volcanic eruptions which both destroyed much of the island and created new islands.  Many of these eruptions occurred during prehistoric periods, but many have been recorded by human history.  These recent eruptions have created an evolutionary laboratory that enables us to answer the perplexing question of how quickly the dispersal of species occurs.

In August 1883 a series of volcanic eruptions on Krakatoa produced one of the most cataclysmic events of recorded human history.  The force of the blast was the equivalent of 13,000 times the nuclear bomb that devastated Hiroshima in 1945.  The blast could be heard as far as 3,000 miles away.  Shock waves from the blast reverberated around the planet 7 times.  The blast sent an ash cloud 50 miles into the atmosphere. The weather of the entire planet was altered by the ash cloud.  The temperature dropped by 1.2 Degrees Celsius in the year after the eruption and the climate did not return to normal until 1888.  The blast and subsequent tsunami killed over 36,000 people and destroyed two-thirds of the island.

Scientists believe that nothing living survived the blast:  “no plant, no animal, no seed, no spore.” (1)  The first scientists visited Krakatoa nine months after the blast.  They reported finding nothing alive except a single spider.  Spiders are notoriously successful dispersers because the webs they weave can become sails on the wind.

In 1886—three years after the eruption—the first botanical expedition arrived on Krakatoa.  They found mosses, algae, flowering plants and eleven species of fern.  They speculated that the arrival of algae enabled the spores of ferns to become established on the otherwise bare ground.  Amongst the plants there were two species of grasses.  Scientists assume that most of these plants arrived via wind, but some species could have arrived as seeds carried by the surf.

Further colonization of the barren island then began to accelerate.  By 1887, young trees were found as well as dense grassland and many ferns.  Butterflies, beetles, flies and a single monitor lizard were found in 1889.   The species of monitor lizard found in 1889 is known to be a good swimmer and is a “versatile opportunist” on land, which means it’s not a fussy eater and it can eat less often than other lizards.

By 1906, there were a hundred species of vascular plants, covering the summit in green and a grove of trees along the shore, including tamarisk and coconut palm.  The coconut is found on virtually any sunny beach in the Pacific because its seeds float in their large protective shell wherever the current carries them.

Fifty years after the eruptions of 1883, the island was home to 171 species of plants.  One botanist estimated that 40% of the plants came on the wind, 30% floated on the sea and most of the remainder were brought by animals.   The eruption of 1883 produced huge quantities of pumice–a lightweight, sponge-like volcanic glass—that floated on the ocean creating rafts that were observed for years after the eruption:  “…a ship’s captain…who encountered pumice on the Indian Ocean, lowered a boat for a closer look, ‘It was curious and interesting to note how it had been utilized by animals and low types of life as habitations and breeding places.’”  (1)

These early arrivals were effective dispersers, but they also had to be capable of surviving inhospitable conditions on arrival.  The order of arrival is therefore an important factor in determining successful establishment.  For example, animals won’t survive if they arrive before needed food resources.  The plants most likely to survive are capable of self-pollinating, that is they don’t require a partner to reproduce.

San Francisco is not an island

How does this experience on Krakatoa compare to our experience in the San Francisco Bay Area?  We’re so glad you asked!!

The many projects all over the Bay Area that destroy non-native vegetation are not isolated islands.  They are surrounded by more non-native vegetation which quickly re-populates the bare ground created by these projects.  Dispersal into small plots of land within San Francisco is much easier than onto isolated Krakatoa.  The majority of these projects do not have the resources to replant the areas in which non-native vegetation is eradicated.  The fiction is that native plants will magically reappear when non-natives are destroyed.  But we can see that the result is the return of the hardiest non-native weeds such as hemlock, star thistle, oxalis, and broom.  These hardy creatures don’t need to be planted.  Their seeds are carried by the wind or remain dormant in the ground to germinate when someone foolishly destroys the trees that provide shade and suppress germination of weeds.

Even when natives are planted, they are quickly out-competed by non-natives.  The best local example of that hard, cold fact is the living roof on the California Academic of Sciences.    When the California Academy of Sciences reopened in San Francisco in August 2008, its “living roof” was considered its most unique feature.  Thirty species of native plants were candidates for planting on the roof.  They were planted in test plots with conditions similar to the planned roof and monitored closely.  Only nine species of native plants were selected for planting on the roof because they were the only plants that were capable of self-sowing from one season to another, implying that they were “sustainable.”  A living demonstration of “sustainability” was said to be the purpose of the living roof.

The many projects that are destroying non-native vegetation are not sustainable.  They are surrounded by non-native vegetation which is better adapted to current climate, soil, and atmospheric conditions.  Non-native vegetation will out-compete the natives that are not adapted to current conditions.  If these projects were merely futile, perhaps we could shrug and move on.  But we can’t turn a blind eye because these projects are harmful to the environment.  They use huge quantities of toxic herbicide and they are destroying healthy trees that are performing many valuable ecological functions.  These are not harmless experiments.